Student learning and student success are at the core of Gulf Coast State College’s (GCSC) mission.

Mission: Gulf Coast State College holds students and community of central importance. The College provides many opportunities for learning and offers a range of programs and services to help students become well-educated, productive citizens. The College is equally dedicated to collaborating with the community to help create or improve economic well-being and to offer the space of the College for social dialog, events of art and culture and other moments that enhance our quality of life.

Criteria: GCSC sets student achievement goals and evaluates the success of achieving those goals in the following areas:

*GCSC is using IPEDS Graduation Rate (150% of standard time) definition and metric to evaluate the student completion indicator. This metric was selected as an effort to track, evaluate and improve student’s success.

Metric in Relation to GCSC's Mission

Note. Directions and Goals are listed in the 2015-2020 Strategic Plan.

Threshold: The following thresholds are the minimum expectations GCSC uses to define its acceptable level of achievement:

Retention Rates were calculated using a cohort of fall beginning of term first-time in college (FTIC) degree/certificate seeking students. Retained students were enrolled at the same institution the following fall.

Graduation rates were calculated using a cohort of fall beginning of term first-time in college (FTIC) degree seeking/certificate seeking students. Students graduated within 150% or 200% of their expected time to graduation. The timeline below corresponds to an Associate of Arts degree. Other programs may have different 150% and 200% end dates.

Success Rate was calculated as the percentage of A, B, C or P grades. *Others is defined as courses that use an instructional method different from web-based or hybrid (This include: Lecture, labs, etc.). Incomplete and audit grades were removed. 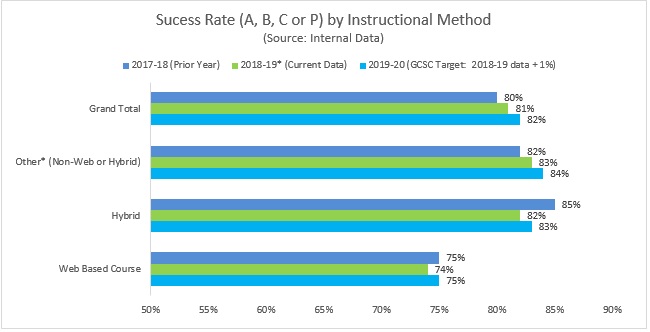 Graduate wages were calculated by utilizing a graduate’s highest wage for full-time employment from the four fiscal quarters the year following graduation. Includes out of state employment data through the Wage Record Interchange System 2 (WRIS2).

Continuing education or Employment rates were calculated by determining if any graduates during the year following graduation were employed or enrolled in a postsecondary institution at any time during the year. Includes out of state employment data through the Wage Record Interchange System 2 (WRIS2) and postsecondary education records through the National Student Clearinghouse.

AA Graduates Performance at SUS, is calculated as the mean cumulative GPA in the SUS system.

Gulf Coast State College does not discriminate against any person in its programs, activities, policies or procedures on the basis of race, ethnicity, color, national origin, marital status, religion, age, gender, sex, pregnancy, sexual orientation, gender identity, genetic information, disability, or veteran status. All questions or inquiries regarding compliance with laws relating to non-discrimination and all complaints regarding sexual misconduct or discrimination, may be directed to Lee Wood, Executive Director, Human Resources/Title II/504/Title IX Coordinator and Employment Equity Officer, Gulf Coast State College, 5230 W. US Highway 98, Panama City, FL 32401.
Search our site or use the directories below to browse classes, employees, faculty, and jobs.
©