The Panama City Campus opened on September 17, 1957, with 181 students, and through the spring of 1960, the College operated in temporary facilities at the Wainwright Shipyard (located across the street from the present location at 5230 West Highway 98).  The City of Panama City provided 40 acres for the permanent campus overlooking St. Andrew Bay; the College purchased the remaining 40 acres. Construction of new buildings on the campus began in 1959, with the actual move to the new campus completed the next year.

Buildings comprising the current campus and other college sites and their dates of first occupancy are:

For its first nine years, the College served primarily the residents of Bay County.  In the summer of 1966, Gulf County became part of the College’s service district, and Franklin County was added in 1984.

The College's mascot, the Commodore, was also chosen in 1966. A contest was held for students to submit their ideas of what the mascot should be and why. The Commodore, a title for a high-ranking naval officer, was chosen based on three unique factors that included: the College being founded on the soil of an old shipyard, the generous contributions the Navy Base made to the basketball team and that the Vanderbilt Commodores are geographically located exactly 500 miles away from the College. 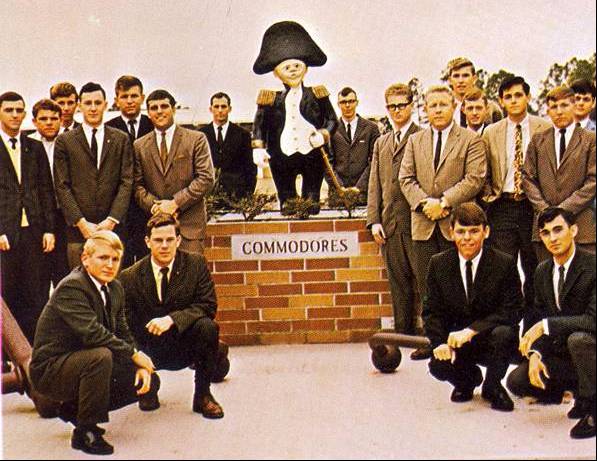 Throughout its history, the College has been committed to providing a first-class education. This commitment is evidenced by the excellent performance of GCSC graduates who transfer to state universities as well as by consistently high GPAs and graduation rates that are higher than the Florida college system averages in most areas measured. The College currently serves more than 12,000 credit, non-credit, workforce, and/or continuing education students (enrollment data taken from Summer 2015 – Spring 2016 semesters).

Explore photos and publications from the College's history in the library archives: http://gcsc.digital.flvc.org/islandora

Gulf Coast State College does not discriminate against any person in its programs, activities, policies or procedures on the basis of race, ethnicity, color, national origin, marital status, religion, age, gender, sex, pregnancy, sexual orientation, gender identity, genetic information, disability, or veteran status. All questions or inquiries regarding compliance with laws relating to non-discrimination and all complaints regarding sexual misconduct or discrimination, may be directed to Lee Wood, Executive Director, Human Resources/Title II/504/Title IX Coordinator and Employment Equity Officer, Gulf Coast State College, 5230 W. US Highway 98, Panama City, FL 32401.
Search our site or use the directories below to browse classes, employees, faculty, and jobs.
©